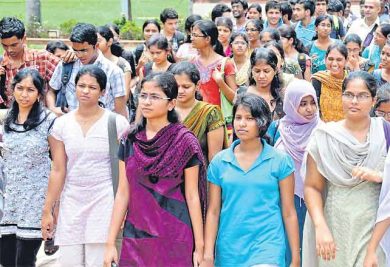 Demographic dividend is defined by the UN Population Fund as “the economic growth potential that can result from shifts in a population’s age structure, mainly when the share of the working age population (15 to 64) is larger than the non-working-age share of the population (14 and younger, and 65 and older).”

In other words, when people in the age group 15-64 can work and pay for the non-working population of kids (14 or younger) or retired (65 or older), then the economy reaps a demographic dividend. This happens rarely in a country’s history like India. The key words are ‘can work’.

In January, the Chief Statistician of India projected a growth rate of 6.5%, the lowest in four years. The growth rate of agriculture has halved, rise in non-farm jobs is reducing, corporate investments in new projects slid to a 13-year low, exports have halved and 17 million people are entering the workforce every year, including 5 to 6 million who are exiting agriculture. The best estimate for new job creation is only 5.5 million jobs.

Moreover, 31 million people were unemployed as of March 2018 and another 6 million graduates were expected to pass out and enter the workforce in April. The bulk of our 500 million seeking work is only partially employed at very low wages. The reality for them is not very encouraging.

In such a scenario, India needs to do six things on a war footing. In a two-part series, we discuss the first two issues that need immediate attention.

The first action step is population management. We cannot provide employment to the 27 million kids born every year. Our biggest challenge today is our 1.35 billion population (2018) and the 15 million net addition every year. As per the 2017 revision of population estimates by the UN, India’s population could surpass that of China around 2024, two years later than previously estimated, and is projected to touch 1.5 billion in 2030.

India was one of the first countries in the world to adopt family planning, back in 1952. Yet, ‘population control’ is a disastrous word in politics thanks to excesses during Emergency in 1977. Why? Because the electorate is believed to be averse to it. It is time it was brought back into national debate. China had a one-child policy and that changed its history. There should be a national all-party consensus. We need to actively promote the two-child per family policy.

Skewed population growth disturbs the balance in the country between North and South. Already people in South feel that their electoral voice is being diminished as North India is more populated. Even Prime Minister Narendra Modi is soft-pedalling this crucial issue.

However, the debate has started. The Finance Commission determines how the tax revenue collected by the Centre is allocated among the States. Population is one of the major determinants to distribute these funds. Two days after a meeting of Finance Ministers from the Southern States that strongly objected to the Terms of Reference in the 15th Finance Commission, Modi was forced to concede that southern States like Tamil Nadu cannot be penalised for population control. This debate has to happen in every family and we have to keep religion out of it. Mass media like TV has to take this debate to all the families.

The above outcomes tell you that 70% of our kids drop out of school. Why? Many reasons. We have put emphasis on quantity instead of quality on the belief that pushing all the children into schools and colleges will change their future. But if the school system is not managed well, the whole thing becomes a disaster.

The school system is driven by the government at multiple levels. First, 70% of children in the age group 6 to 14 study in government-run/supported schools. The government regulates the remaining 30% children’s education in private schools through extensive oversight. Net result. Disaster.

Second, build residential schools for special sections of society like SC/ST population. These again should be run by independent non-profit societies because these children need both nutrition and education.

Third, the government should provide education coupons for each poor child (from the money saved by not running the schools). The family can use thees coupons to send the child to any school of their choice and pay the differential fee. Fourth, put quality of education on a par with school access. Affordability is important but if the quality of education suffers due to this, it is not worth it. Today, State governments are trying to cap school fees. This commoditises schools and discourages differentiation. Set the fees based on the cost structure required to run a quality institution.

Fifth, change the assessment pattern from the current objective type written exam to project submissions and publish the answer sheet and scores to prevent assessment fraud. The assessments should separate children who are academically inclined and suitable for higher education from those vocationally inclined. Set pass standards high and do not dilute them for political reasons.

Sixth, encourage children and their parents to opt for vocational education. Seventh, expose children to career counselling and encourage them to choose their career based on their aptitude and competence. Eighth, insist on transparency to prevent excessive profiteering by school owners.