NotRetired.in - With 20 Degrees, IAS Officer Shrikant Jichkar Was The Most Educated Man of India!

With 20 Degrees, IAS Officer Shrikant Jichkar Was The Most Educated Man of India!

It is the pursuit of knowledge that takes a man from darkness to light, and it is said that no matter how much knowledge you have, it is never complete or enough. Dr Shrikant Jichkar was someone who followed a similar school of thought, and you will be baffled with his educational qualifications—the man had acquired 20 degrees!

Yes, that is true. Dr Jichkar was a scholar in a variety of fields ranging from journalism to medicine! While he began by pursuing and completing an MBBS degree, once he received it, he realised that apart from medicine, he was just as interested in other fields. And this is how he began his educational pursuits. 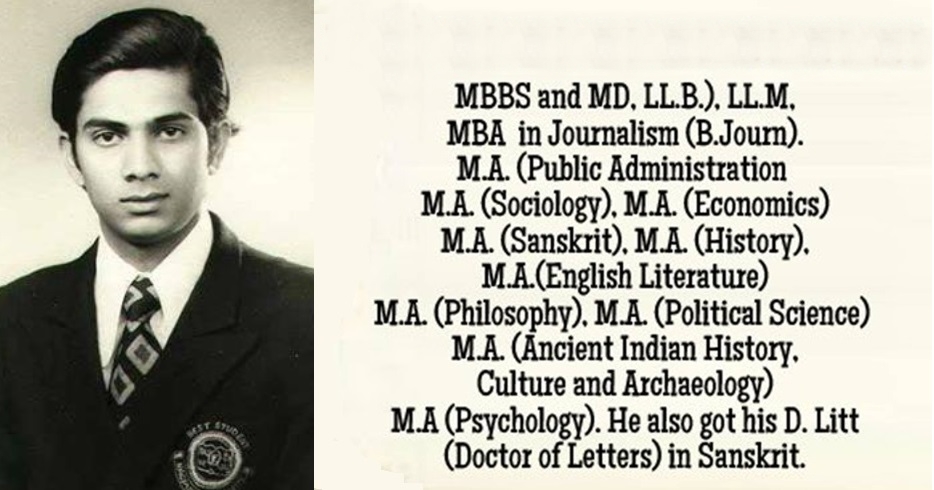 Is it a surprise then, that he had an in-house library of about 52,000 books?

Dr Jichkar’s thirst for academic knowledge did not end here. He even secured a D Litt in Sanskrit—the highest educational degree one can acquire in the subject. Later in life, he single-handedly established the Sanskrit University in Maharashtra and served as its Chancellor.

Born in 1954 near the Nagpur district of Maharashtra, Dr Jichkar’s journey towards attaining these degrees began when he was just a 19-year-old. Between 1973-1990, he spent his summers and winters appearing for University exams.

However, he had loftier aims, so he resigned and reappeared for the exams—and hit the bulls-eye this time as he got selected to the Indian Administrative Service (IAS).

Jichkar with a Limca book of records trophy. Source.

After four months of serving as an IAS officer, Dr Jichkar contested the general elections and was elected to the Maharashtra Legislative Assembly in 1980. He was just 26 years old, and became the youngest MLA in the country!

In 1999, when Dr Jichkar lost the Rajya Sabha elections, he turned his focus to travelling. He had always been an artist at heart and enjoyed painting, photography and performing in plays. He travelled to various parts of the country to speak about health, education and religion. At the same time, he also represented India at UNESCO.

In his mid-forties, he was diagnosed with cancer in his adrenal glands. Although he battled the disease, life had other plans for him.

On the fateful night of 2nd June 2004, Dr Jichkar was driving his friend home from a farm in their native district of Nagpur when a bus slammed into their car. That night, Dr Jichkar passed away at a young age of just 49 years.

Although he had a relatively short life, it is evident that the doctor, lawyer, IPS and IAS officer and politician lived a full life. His name has been immortalised in the Limca Book of Records as the most educated man in India. If there is any inspiration we can take from Dr Jichkar, it is that we should follow our passion and heart, as this decision will undoubtedly lead us towards greater achievements.