After Saving Thousands in Kuwait, 82-YO Soldier Now Helps Tame Traffic in Bengaluru

“I might not be directly out on the battlefields, but I am still fighting,” the inspiring legend says. He can be spotted on week days directing morning rush hour traffic on Bannerghatta road, Bengaluru. Keep an eye out for this true hero!

Every morning, while heading to work or elsewhere, most of us are met with an unfortunate urban reality—Traffic. Even if we plan and time the commute, it feels like every hour is rush hour.

Amidst the cacophony of vehicle horns, frustrated curses uttered by commuters and toxic fumes, we often miss out on those few individuals who work long and tiresome hours to make our journey more secure.

Captain Modekurti Narayan Murthy is one such person.

Emerging from the crowd in a pair of khaki pants, a white shirt, a helmet, gloves and a neon green vest, he encourages commuters to calmly follow traffic rules so that they can reach their destination, safe and sound.

A former army man, Captain Murthy has been voluntarily clearing traffic on Bannerghatta main road—one of Bengaluru’s busiest roads—for the past 11 years.

“I joined the Indian Army in 1959, and from the very beginning, my work revolved around saving lives. Once I retired, I volunteered to help out the traffic officials here. It all began with helping elders and children cross the road, and soon, I was placed at the major junctions to properly lead the traffic. Roads across the country are a driver’s worst nightmare, and I am doing my bit to help. I don’t consider this to be very different from what I was doing earlier,” shares Captain Murthy with The Better India.

A celebrated soldier, he was involved in several high-profile operations, like the Goa Liberation (1961) and the Sino-Indian War (1962). After his 15-year-long service in the army was complete, he joined the International Airports Authority (currently known as the Airports Authority of India) and worked there from 1974 to 1980.

In 1990, while working for Air India, Captain Murthy had the opportunity to save tens of thousands of lives during Operation Airlift.

“It is an experience that I will never forget. I was posted in Amman, Jordan in October 1990 to assist the Gulf and Middle East region. The evacuation of 1,16,134 Indians was the largest evacuation effort in the history of civil aviation, and I was working on the ground as the security in-charge,” he reminisces.

His work as a traffic warden, although not as challenging as before, holds a long-term impact, he says. 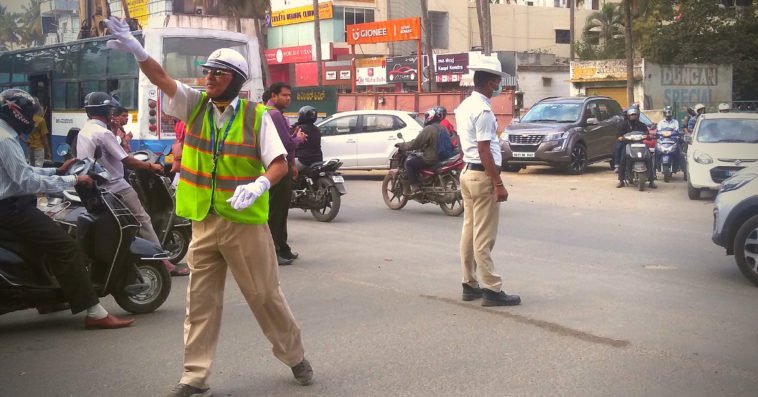 “I might not be directly out on the battlefield, but I am still fighting. This time it is against the careless attitude towards traffic and its rules. It might seem to be a small thing to most people, but it covertly dictates our daily life and can even cost people their precious lives,” he adds.

About to turn 83, on June 26 this year, Captain Murthy is planning on migrating from the roads to schools and colleges. He is an active part of the awareness drive on road safety that has been initiated by the Traffic Police to get children to follow traffic rules and educate their elders.

He says, “Traffic is a serious affair, especially in urban areas, and awareness is crucial. The current outlook on road safety needs to change, and there is no better place to start than schools and colleges, which nurture the youth of the country.”

Recognising his contribution to the society, the Karnataka State Government awarded him the Kempegowda Award in 2011. However, his multifaceted efforts continue to be mainly of the common radar.

“I don’t work to gain fame or money but to make my life more meaningful. I believe that every individual, at some point in his or her life, needs to own up this responsibility and dedicate the best efforts and resources to serve the society in any way possible,” he says before signing off.

The idea of saving lives, be it in on the battlefield or on the roads of Bengaluru, continues to drive Captain Murthy to serve his nation. In a world engulfed with problems, it is these few unsung heroes that bear the torch of solution and impact, inspiring generations to create a better tomorrow!